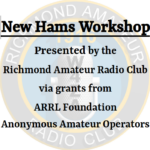 The students entered the freight area of the old train station and found John DeMajo, K5HTZ, sitting at the first table with lengths of copper pipe prepared to show how to build and tune a 2-meter J-Pole. The students learned about SWR and antenna analyzers. The next pair of tables were for building and testing hang-up ground plane VHF antennas. Soldering, terminating transmission lines, and roll-up J-Poles made of 300ohm TV cable were built there by the students. Mike Owens, K4RKO, Rob Thomas, KC4NYK, and Steve Boles, W4SB, handled that table. At the next table was George Starke, WB4VWR, with ARRL handouts, handouts he made on clubs and nets in the RVA, and a lecture on public service, emergency communications, Skywarn, and ARES. They learned the secret codes of “listening” versus “CQ.” At the fourth table was Ken Zutavern, K4ZUT, with an SDR receiver, a loop, and a show-and-tell on spectrum displays. Outside on the loading ramp was Bill Catogni, N4WLC, with a satellite rig and an HF rig with loop 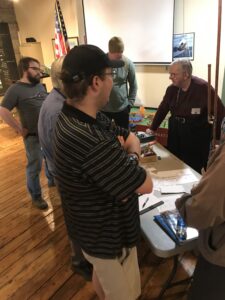 K4HTZ and the J-Pole table

demonstrating satellite communications (no convenient flyovers) and HF jargon (of which there was plenty).

Not formally on list of topics – but a big part of the session – was “seasoned” hams welcoming new hams into our community. We did what ham radio mentors-elmers did for new hams in the past. We’ve send a survey to the students to see what they thought of it.

This is the first of three workshops we plan through February 2023.

We were thinking of up to 40 students would attend. We got 10. It was one of the first gorgeous spring days after a 2 year pandemic and there were hundreds of events planned in the area. Duh; I should have expected that. The nice part of 10 and not 40 students was we saw that we need to figure out how to scale it up for a larger number when we do our second workshop at Frostfest in 2023. The nice thing about Frostfest is that it’s in February when there is far less competition from community events. 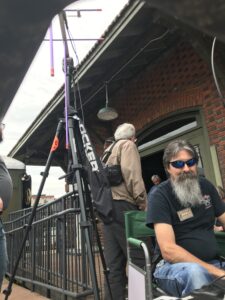 N4WLC showing how satellites and HF are done

The third workshop is planned as “New Upgrades Workshop.” The emphasis there is HF antennas, logging, and making HF contacts on very crowded airwaves. It’s making new upgrades to General and Extra more comfortable with crowded, noisy, competitive HF. We plan for that one at Frostfest 2023.

My thanks to the seven instructor-mentors who led this effort.